Kelia Todd: In a class of her own

Kelia Todd: In a class of her own 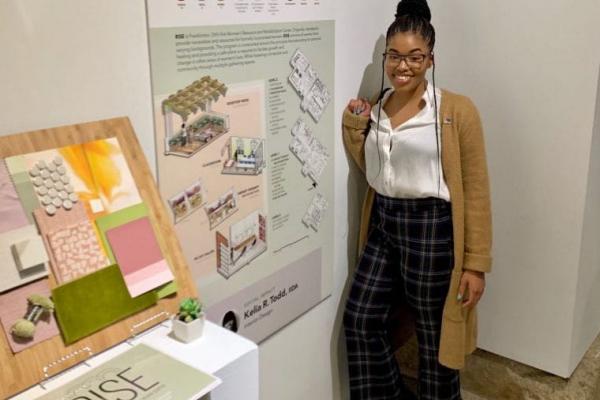 Kelia Todd knew she wanted to be an interior designer since she was in eighth grade. Little did she know then that she would be the only black interior design student in the 2019 graduating class of Ohio State.

After her story garnered attention on social media, people started to take notice and reached out to Todd. She said she never expected the outpour of attention and congratulations she has received. Although it’s overwhelming, she said it’s good to be seen.
“Going through it, I didn’t understand how big it actually was,” Todd said. “Now that I’m here and it’s almost over, I’m like, ‘Wow, I really did that.’ So I’m happy to be inspiring other people.”
Todd participated in the Big Ten Student Design Challenge this past fall and impressed the judges.
“Her team placed first to represent Ohio State, and then went on to the competition of the top three schools, and from there, her team ended up winning the entire competition,” Rebekah Matheny, an assistant professor in the Department of Design, said.
Todd is no stranger to awards and nominations; the design challenge was one of many competitions in which she has excelled.
“There were five students nationally who received scholarships as a diverse student sponsored by IA, which is an architect firm, and she got second place in that as well,” Matheny said.
She also recently won Best in Show in the interior design segment of the Department of Design Spring Exhibition 2019 show, where graduating seniors feature their theses. For her senior thesis, Todd focused on the Franklinton neighborhood of Columbus, which she described as an impoverished community currently undergoing gentrification.
“They’re building it up, so that it’s cute,” Todd said. “But it’s gentrification. It isn’t for that community necessarily.”
What started as a desire to create something for women turned into building a resource and rehabilitation for formerly incarcerated women to transition back into society.
Part of the design process is evaluating needs and conducting case studies, she said. She spent a semester brainstorming and writing down potential problems followed by how she could incorporate features to address them.
“When you get to the root cause of why these women end up in the position they do, a lot of times it’s therapeutic inter-conflict things,” Todd said. “So I knew my space needed to be partly some therapy and some practical resources.”
To add to her list of accomplishments, Todd said she also accepted a full-time offer as an interior designer at a black-owned architecture firm — Moody Nolan Inc. — at which she formerly interned.
Because she is one of the only black interior design students, she’s had to navigate many challenges on her own, including the internship she currently holds, Todd said.
“I got my internship completely on my own,” she said. “I think I got used to having to do everything by myself.”
In the past couple years, she’s come across mentors who have guided her with their insight and experience.
Todd said she had her first class with an African American female professor just last year. That professor was Koritha Mitchell, who taught English literature and with whom Todd said she shares a personal bond and still speaks with to this day.
“I was just mesmerized by how powerful and intelligent she was,” Todd said. “Just having someone understand the importance and what it’s like to be surrounded by people that look like you makes all the difference.”
Todd also cited Matheny as one of her mentors whom she regards as a great resource both inside and outside of school.
“Speaking specifically as a minority student, I’ve encouraged her to bring her perspective, life experiences and personal voice to the design process, to her classmates and to her internships,” Matheny said.
Meeting powerful women has been helpful in many regards, Todd said. Meeting them solidified her belief that her chosen career path was what she wanted for the rest of her life.
One mentor who has been with her for all of her life is none other than her father, Randy Todd.
“She is such a mature young lady, and I’m so proud of her, just her self-confidence, the way she coordinates and her time management and the way she does things,” he said.
Although she’s comfortable with where she is now, Kelia Todd said her dream job is to work closer with schools and children.
“I really want to get into a position where I’m working mostly, if not solely, on schools,” Todd said. “I want to make an impact on people’s lives, and children are very impressionable.”
Todd said anything has the potential to be fun, whether it be office spaces or classrooms.
“If you really enjoy the environment you’re in, you’ll actually want to be there. It doesn’t make sense that your economic status determines the type of school you go to or the type of education you get,” Todd said.
Working with underserved communities is her main focus and is what will leave her content with herself, she said.
“She’s really interested in education and designing schools, particularly minority focused and underprivileged, lower-poverty-level students,” Matheny said. “Which just shows that when you come from those areas and that diverse background you can bring that perspective to make real tangible impacts for other people.”

This article is reposted with permission from The Lantern, where it orignally appeared on April 22, 2019. https://www.thelantern.com/2019/04/in-a-class-of-her-own/