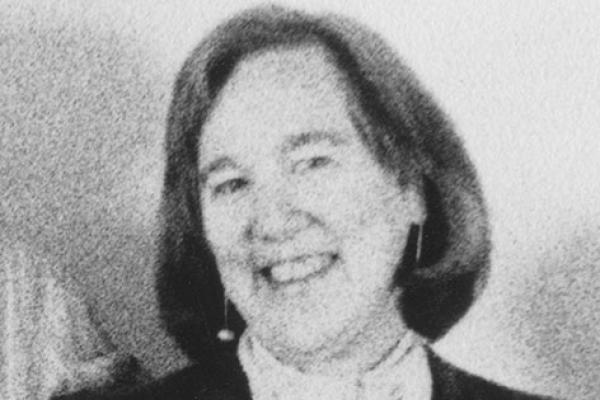 The Department of Design has received the sad news that former long-time professor Virginia Weinhold died on May 16, 2019 at the age of 86.

Weinhold began her education as a graduate of Cornell University in Chemistry and Zoology in 1955. Following marriage, motherhood and a move to Columbus, Ohio, she became a student at Ohio State, receiving her Bachelor of Fine Arts cumma sum laude and Master of Arts in Design Management degrees before establishing herself as a professional interior designer in Columbus.

She was the director of interior design at Karlsberger & Associates, Inc. from 1972 to 1982. Virginia joined the faculty in the Industrial Design Department as an Associate Professor after a decade of professional practice, and she remained an important contributor to the education of design students for twenty years. She spent five years as the graduate studies chairperson and worked tirelessly on behalf of the establishment of graduate education in design.

She was honored with many awards including a Human Achievement Award from CID for her commitment to the advancement of contract interior design in 1989. As a scholar, her publications ranged from focusing on professional ethics to technical subjects that included a book on Interior Finish Materials for Health Care Facilities (1988). She also helped lead the cause for interior design accreditation as president, vice president, treasurer, and national trustee for organizations such as the Foundation for Interior Design Education Research (FIDER, now CIDA), the Interior Design Educators Council (of which she was a founding member), the Institute of Business Designers (now IIDA), the American Institute of Interior Designers (AID), and the National Society of Interior Designers (NSID).

Students of Professor Weinhold were fortunate to work with a teacher who cared so much about the professionalism of interior design practice. Current faculty members and our students are grateful for all that Virginia Weinhold did to build strong reputations for our interior design program, our graduate program, and for the department’s leadership in research-based design. Her legacy continues as we strive for excellence in interior design education and in our efforts to ensure that Ohio State Design has a representative voice in conversations about the future of design practices.

At this time there are no memorial services planned.  Those wishing to share sentiments or memories with her daughter, Amy Weinhold, may do so at amyweinhold7@gmail.com. Please mention Virginia Weinhold in the subject line.

In lieu of flowers, donations may be made to Cradle Beach Camp, 8038 Old Lakeshore Rd, Angola, NY 14006, 716-549-6307, www.cradlebeach.org.  They have an online donation option for which you can designate that it is a memorial donation in memory of Virginia.